Sweet, but not cloying sweet, due to muscat grape’s natural sugar, fruitiness, and balancing acidity; petillant bubbles (slightly sparkling); round, smooth, light-medium body; low alcohol (7%); very easy drinker. This is wine folks who say they do not like wine likely will enjoy. Works as an aperitif, particularly as choice among mixed group of wine drinkers; will work as desert wine for range of palates.

Like many moscato bianco wines, sophisticated wine drinkers may balk at its sweetness and simplicity, but others with different palates will rave. Isn’t that the beauty of wine? Serve on the patio or around the pool, throw in a dry vinho verde for those who don’t go for the sweet stuff or a dry rosé aperitif for some, this moscato for others.

The muscat family of grapes embraces more than 200 varieties and has been farmed for millennia. Muscat bianco is one of the most popular and is oddly misnamed (bianco is Italian for “white”) because they are famous for frequent color mutations, although most become deep yellow after veraison. The grape makes a wide range of sweeter wines that currently are on a steep popularity curve. The very very sweetness and simplicity that turns off big, bold red wine drinkers is the appeal to the other palates.

The De Zan and Candoni families have been making wine since the late 1800s. Both families acquired large viticultural terrains in their respective regions. Both families worked to allow their wines “taste for the territory”—what French call terroir. The marriage of Armando De Zan and Elviana Candoli brought the winemakers together.

Today, Barbara and Caterina—daughters of Armando and Elviana—continue the tradition of the Candoni De Zan family wines, but they do so from American base in Atlanta, GA. In 2000, Armando and Elviana founded in the USA the Arel Group Wine & Spirits, Inc., with vision of importing family wines to the US. Barbara was born in Venice, Italy, but moved with the family to Atlanta at age eight. Caterina was born in Venice, but moved to Atlanta with her parents at age six. Both went to school in the US, then returned to Italy to graduate with degrees from the University of Udine; both completed the second level of Sommeliers Certification. Wine truly is international today, and the De Zan and Candoni families are exemplars of the globe embracing reach. 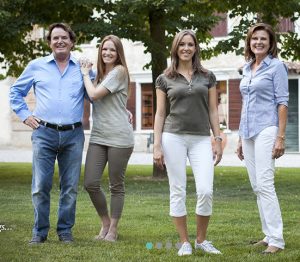