reserved oak and lithe tannin; fruit-forward without over-ripe sweetness. This is basic Napa cab made by the oldest and among the best wineries in Napa and is everything you could ask for in a Napa cab at this price. Charles Krug was authentic Napa Valley wine pioneer, establishing his namesake winery in 1861; Krug produced wine until his death in 1894; James Moffitt owned the winery until Robert Mondavi persuaded his parents (Cesare and Rosa) to buy it in 1943; Robert worked there until he started his own winery in 1966, but Robert’s younger brother Peter (sometimes called the “quiet Mondavi”) stayed at Krug and the winery remains in the hands of Peter and Peter’s family (sons Marc and Peter, Jr. today). Peter, Sr. at age 100-plus, still participates in the operation almost every day. His granddaughter, Angelina, is the first woman winemaker in the family, and represents the fourth generation; Angelina and her three sisters own and operate Dark Matter Wines. This is the Charles Krug mass market cab, a delicious opportunity for the many to taste history and family achievement. $26 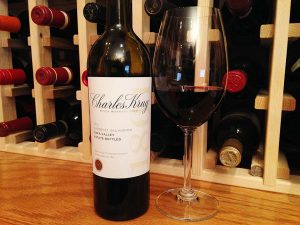