intense fruit, tame tannins, balancing acidity; dry, rich, full bodied, delightfully smooth with whispers of fruit sweetness in long finish. Rated the #1 Best Buy for 2012 by Wine Enthusiast (90 points plus price gave Vega the victory) This is made with touriga nacional (often called one of Portugal’s finest grapes) and tita roriz (the Portuguese name for tempranillo); so this marries the signature reds of Portugal and Spain. Maker José Neiva Correia, 59, is a powerhouse of Portugal’s wine industry; he descends from winemakers on both father and mother sides; the center of the winery was purchased by his great grandfather. DFJ Vinhos has grown in the past decade to a six million-bottle producer across 33 brands and 77 different wines. Correia is noteworthy for introducing new varieties into Portugal and for promoting healthy agricultural practices. He patented a method for disinfecting corks that now is industry standard and stopped the alarming trend toward corked wine caused by TCA. He also developed a cross with grenache and malbec—caladoc. He also is a fan of alicante bouschet, a cross of petit bouchet and grenache; he was the first to bottle this as a varietal. In short, this is delicious, big-time-award-winning wine by major force in innovation and production in Portugal. Clearly worth a taste. Or two. Or the whole bottle. $11 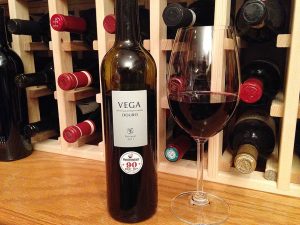