Medium body, complexity from six months on the lees, partial malolactic to create a semi-creamy mouthfeel and texture, but to also maintain vividness of the 100% chardonnay fruit. Fermented in French oak barrels for 14 months before blending. Relatively small percentage of new oak used, so while there is vanilla and oak, it is tastefully balanced by the fruit and acidity (3.60 pH). While you do not have to decant, exposure to air brings out nuances in this complex bottling.

The grapes for this limited release primarily come from the winery’s block 105, “right outside our front door,” which still is on its original roots, thus the “heritage” name. Edna Valley Vineyard lies on the coastline about halfway between Los Angeles and San Francisco near San Luis Obispo, and the winery’s tasting room is a must-visit in the city.

Although wine production in the region dates back to Gold Rush days, the current operation’s roots trace to vineyard developer Jack Niven in the 1970s, who planted the vines from which many of the grapes in this effort come. The winery aims to offer a true expression of California Central Coast terroir; Edna Valley consistently succeeds in this effort. Edna Valley Vineyard Heritage Chardonnay is one of the winery’s premium offerings (the Reserve sells for $5 more). While you can get very serviceable Edna Valley Vineyard chardonnay at half the price, it is worth it to splurge. $27-30 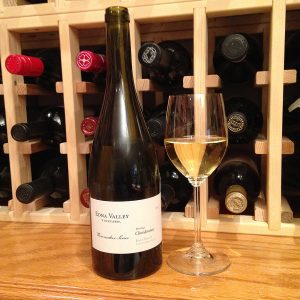