racy acidity (3.25pH), creamy, some complexity thanks to sur lie aging in predominantly used French and American oak barrels—that imparts the creaminess expected from oak, but this is well back of the oak monster demarcation line. Restrained use of oak rounds out the wine rather than dominating it. Soft tannin, bright and persistent flavors, very easy to like. Grapes for this creation come, mainly, from southern part of Napa Valley, particularly from cool-climate vineyards in the Carneros Region bordering San Pablo Bay. Wine is made in the Oakville winery located in Franciscan’s Oakville Estate. The winery and vineyards are in the heart of Napa, across the road from Opus One, adjacent to Silver Oak, just west of Screaming Eagle, across Hwy 29 from Robert Mondavi and Far Niente—you get the picture. The winery earned Napa Green Certification in 2009; the focus remains honoring the land; original owner Agustin Huneeus Sr. famously said: “you don’t have brands in our business, you have properties.” Today, Franciscan is owned by Constellation Brands, but as I have asserted before, the largest wine maker in the world is smart enough to enable the properties they acquire to remain true to the reasons the properties were worth acquiring in the first place (which likely is how they became the world’s largest winemaker from humble beginnings in the Finger Lakes of upper New York State). Nicely done chard, will please many palates, nicely priced. $14-18
Second photo: Franciscan Estate winery grounds.
Franciscan Estate website 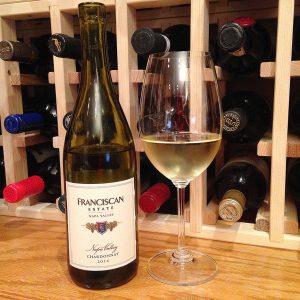 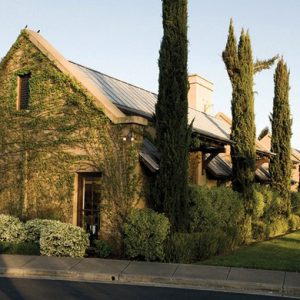