on the palate, lingering lime on the finish; food friendly, racy style—bracing acidity and light juiciness. Sauv blanc has become the alternative to chardonnay for the ABC (Anything But Chard) crowd because it is wonderfully food friendly, thanks to acidity and citrus-melon-lemon flavors, and because—unlike chard—you pretty much know what you will get (chard can be almost anything the winery wants, from flinty austerity to a buttery soft vanilla bar). To be fair, sauv blanc can be treacly, too, but quality makers abandoned that style decades ago. The grape likely originated in Bordeaux, but now is better known in France as a Loire Valley wine (where it is called Sancerre and Pouilly-Fumé). Sauv blanc really hit its stride in New Zealand in the past few decades; NZ found ways to evoke more fruit expression and more vivid grassiness, creating a style now copied even in France. Sauv blanc’s history in California is checkered; it was labeled Fumé Blanc by timid California makers (led by Robert Mondavi) who tried to distance the grape from sweet and cheap early efforts in the state. Fumé Blanc is a made-up marketing name. Once New Zealanders demonstrated the delights courage and commitment could produce, more California makers went back to sauv blanc on the label, and Fumé Blanc became more associated with boxed plonk—the opposite of the original intent of the made-up name. Fumé, by the way, means smoke, but smoke is not component of sauv blanc flavor profile. The smoke reference comes from a gray bloom, the color of white smoke, that coats the grape at maturity in the Loire Valley. Fumé also refers to the smoky bouquet—sometimes called gun flint aroma—found in Pouilly and the Loire Valley. Bottom line: a dry, competently made sauv blanc will pair with almost any food. Something to fall back on when you are flummoxed by the food-wine choice. $18 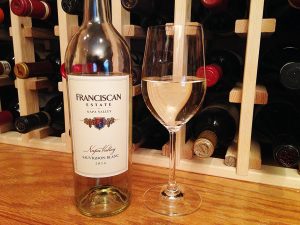