tasty tannin, oak; nice balance, some complexity, very easy drinker, all nicely achieved in very large production wine. Plenty of Paso grapes go into this effort: 75% cabernet sauvignon, 7% petite sirah, 7% merlot, 4% petit verdot, 3% syrah, 1% cabernet franc, and some other reds tossed in for good measure. Paso Robles, west of Bakersfield, north of San Luis Obispo, is heart of the Central Coast wine growing region; its long growing season, hot days and Pacific Ocean cooled nights make for juicy, robust, sometimes decadent wines. The area’s wine story dates back to late 1700s and Spanish missions, but it hit its stride in recent decades as growers on the 32,000 vineyard acres moved from mass production to more refined efforts, reflecting the market shift to better wines over cheaper jug stuff. Now in their fifth decade of winemaking, the J. Lohr family has been integral part of that shift, but they still crank out more than 600,000 cases of this offering, meaning you should be able to find and enjoy Seven Oaks almost anywhere. This is superb burger and pizza wine, but it will work well with tonier fare, too. J. Lohr (the J is for Jerry, the founder of the family effort) also punches up the feel-goody buttons: sustainable agriculture, the largest solar energy array in the wine industry to power their winery, and employee ownership programs. All in all, Lohr is laudable operation, and Seven Oaks is one nice wine at a very nice price. $15-17 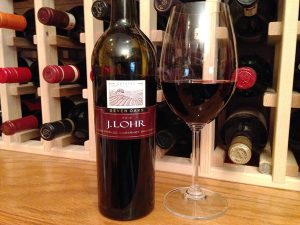