still energetic after five years, lively on the long, frisky finish where waves of sharp fruit pleasure you with astonishing duration. This once was improbable wine: it comes from the Languedoc region of southeastern France, a region long known for exuberant over-production of low-end table wines that only had a market because French drank so much cheap wine. Aime Guibert had a different vision when he planted his first vines in 1972 and crushed the first Mas Daumas Gassac red in 1978. Guibert saw the possibility of a Grand Cru de Languedoc from the unique terroir he found in his 52 plots, each embraced by the Mediterranean forest called the Garrigue. Guibert pulled it off, and in the doing showed other Languedoc growers that pallets of plonk could be replaced by more proper pours, changing the image of the huge region over the next 40 years. Like California’s Central Valley and Central Coast, there remain vineyards committed to box and jug wines, but there now also are Languedoc offerings of quality paired with reasonable prices. This is blend of 70% cabernet sauvignon, 6.2% cabernet franc, 5.3% merlot, 3.6% pinot noir, 3.2% tannat, 2% malbec, 9.7% various rare grape varieties. As you may surmise from the summary of grapes, this is big and bold, with real tannins and lots of ebullient flavors that benefit from air. The bottle label recommends decanting; the website suggests opening for several hours. They know their wine: follow their advice. Then enjoy a tasty wine with superb depth and complexity, that—for a wine of this quality—sells for a reasonable price and is widely available. $49 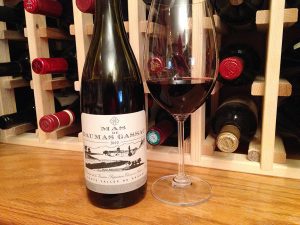