This is blend of grenache (45%), syrah, merlot, and zinfandel; grenache gives it fruit juiciness, syrah spice and pepper, merlot smoothness and plushness, the zin plays especially on the finish with blackberry, plum, and a pinch of blackcurrant tang. Medium tannin, some oak sweetness but not over-the-top.

This is well-made wine for what it is—a Central Coast gathering of grapes made for pop-and-pour pizza night; for the price you get simple and nice, not sophisticated layers of nuanced flavors; there is a touch of grape jam to it, which will be a plus for some.

The backstory to this wine is more complex and compelling than the wine: the McBride sisters were born and raised 7,000 miles apart. Robin grew up in California and Andrea in New Zealand. Neither of them knew of the other’s existence. Then things changed. Andrea was 12 years old, just home from school, when she received a call from her father. “He said he had just gotten out of the penitentiary. He said he had terminal stomach cancer. And oh, by the way, you have a sister.” Dad said he thought Andrea’s sis lived in California and gave her the name “Robin McBride.” Dad was 6-foot-6-inch ladies man, but not so good as a husband or parent. He divorced Robin’s mom when Robin was two. In New Zealand, he divorced Andrea’s mom early in her childhood, too. When Andrea was seven, her mom died of breast cancer. A foster family in New Zealand raised her. Then came the phone call from a man she never really new. The sisters found each other just before their father died. Andrea was a 6-foot-1-inch USC volleyball and track and field star who studied international business and was fascinated by wine; Robin worked in electronics marketing and was fascinated by wine. Today, their wine company is the first one run by African American sisters. The wine is tasty and worth a try; the backstory is amazing. $14-16 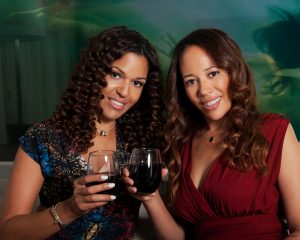