This was difficult vintage at McPherson—late frosts and snow hammered the whites and many of the reds on the Texas High Plains. Typically, this is a Texas viognier-driven blend; viognier proving to be a Texas terroir winner, even if the name hardly comes from Texas central casting; roussanne also plays a starring role, adding aromatics, elegance and acidity. The 2013 spring, however, vanquished viognier and roughed up roussanne on the High Plains. Fortunately, winemaker Kim McPherson has an award-winning winemaker, his brother Jon, in the bullpen in California. This vintage is 40% grenache, 30% viognier, 30% roussane and carries “Brothers Blend” on label because Jon rode to the rescue and supplied much of the fruit, likely the grenache, from the Left Coast grape cornucopia. Thus, some of the grapes in this bottle did not grow in Texas, but they got here as soon as they could.
On the label Kim laments the vicissitudes of farming on the Llano Estacado and the fact he cannot “proudly put ‘Texas’ back on the label where it belongs,” but this is very serviceable white blend with superb acidity (which always helps, especially with food pairing), pleasant fruit flavors, and a nice citrusy, tangy finish. “Les copains” is Spanish for “the friends,” and this is food-friendly effort.
Winemaker Kim McPherson is the son of Dr. Clinton “Doc” McPherson, one of the founders of the Texas wine industry. In 1976, Doc—a chemistry professor at Texas Tech—and Bob Reed founded the Llano Estacado Winery in Lubbock, one the first post-Prohibition wineries in Texas. Inspired by dad, Kim graduated from Texas Tech with a food science degree, then the enology and viticulture program at Cal-Davis. He worked at Llano Estacado, then Cap*Rock until starting his own label in 2000. Kim converted a 1930s-era Coca Cola bottling plant into a winery in downtown Lubbock in 2008; that is where his wine is made using Texas-grown grapes, unless the Texas weather gods say, “whoa, there, fella” as they did in 2013. Even when McPherson has to truck juice from Californ-eye-a, they make good wine in Lubbock, and this is an example. $18-25
McPherson website 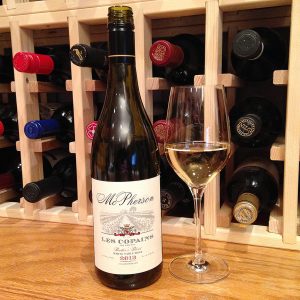 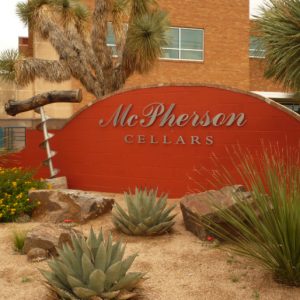