famously and fabulously smooth in the mouth with rich texture, silky tannins and pleasing finish. Mondavi is a master at superb, large-scale production of Napa cabs, a legacy of the founder, Robert Mondavi, who revolutionized wine making and marketing. Constellation Brands owns Mondavi now, but the affordable quality remains. This is Bordeaux blend of 87% cabernet sauvignon, 8% merlot, and 5% cabernet franc. Mondavi makes the wine, but Napa succors the grapes, and this is widely available, affordable access to Napa terrior and distinctive deliciousness. About an hour’s drive north of San Francisco, Napa is the New World’s most famous and prestigious wine region. Napa lies immediately north of San Pablo Bay and runs southeast-to-northwest for some 35 miles between the Vacas Mountains to the east and the Mayacamus Mountains to the west. It is some of the most valuable agricultural land on earth, with acres fetching six figure price tags. The iconic Mondavi winery, built in 1966, sits in the middle, just off Highway 29, just north of the “census-designated place” of Oakville, just south of the “census-designated place” of Rutherford. Those famous Napa places are census-designated places because of their tiny populations—around 100 people each. Robert Mondavi Napa Valley Cabernet Sauvignon is a delicious go-to wine when you want to up your game from commodity cabs but don’t want to go all-in with bottles costing two, three or more times as much. Dependably authentic and well made. $26-28
Mondavi website
Second photo: Robert Mondavi with iconic winery entrance in background 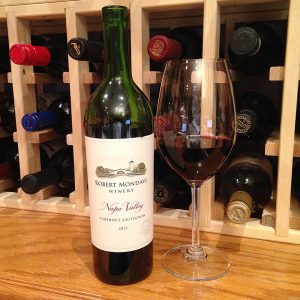 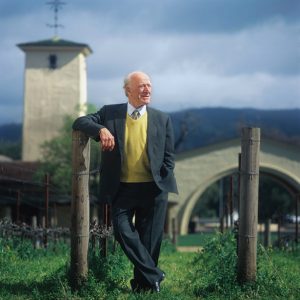