Smooth, with crisp, cutting acidity and citrus. Made with 100% chardonnay grapes using metodo classico (méthode Champenoise—fermentation in the bottle, same as used in Champagne); the wine rests on its lees for minimum of 24 months, adding depth and richness. Fine, persistent bubbles. A great value for wine made this way.

Rotari gets its name from the Lombard King Rotari (or Rothari), 636-652, who brought most of northern Italy under Lombard control through a series of military campaigns. Rotari’s Edict of Rotari (Edictum Rothari) was the first compilation of Lombard law, and included rules for making wine. It mirrors Germanic legislation of the period; the Lombards were a Germanic people who ruled northern Italy from 568 to 774.

Rotari vineyards are in the foothills of the Dolomite Mountains—the Italian Alps—ranging from 950 to 2,500 feet. The elevations, clear sunlight, cold nights and breezes from some 400 lakes and glaciers create an ideal environment for crisp, acidic, elegant sparkling wines, such as this example.

Rotari is owned by the Trentino-based Gruppo Mezzacorona, a group of wineries that has been making wines in the region for more than a century. All Rotari wines carry the “Trentodoc” label, earned by adhering to strict quality control standards.

Rotari Brut will serve as terrific aperitif and can pair with wide range of foods, including spicy ethnic dishes. Great pair with Italian cuisine, especially Lombardy, Friuli-Venezia Giulia, Veneto, and Trentino-Alto Adige dishes—but this will work with almost anything, as sparkling wines tend to do. 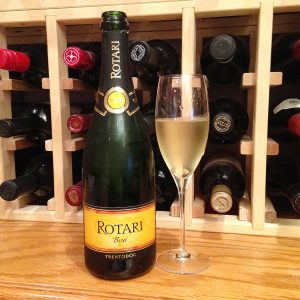