restrained oak and malo-butter add discrete elements of vanilla and bacon; nice acidity; lemon zest on the finish sums up a well-made, palate-cleansing chard. Simi is a cornerstone winery in Sonoma. Giuseppe Simi immigrated from Tuscany in 1849 to find fortune in the California gold fields; he found it in the growing fields instead. Giuseppe and brother, Pietro, began making wine in 1876 under the Simi name; Simi has made wine in same cellar in Healdsburg since 1890. When the Simi brothers suddenly died in 1904, Guiseppe’s 18-year-old daughter took over management. She sold vineyard holdings upon passage of Prohibition, but held the cellar. Upon repeal of Prohibition in 1933, Simi had a half-million cases of perfectly cellared wine to sell. Isabelle ran the winery for 66 years. In 1970, Russell Green, later joined by Zelma Long, took control. Under their leadership, Simi expanded while continuing to focus on quality Sonoma wines. The winery was green certified in 2008. This chard is excellent-for-price pour from legendary Sonoma cellar. $14-18 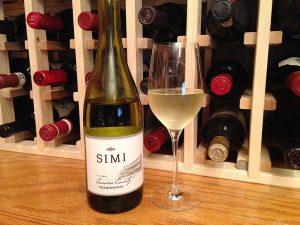