fine tannin, some acidity (3.77 pH), smooth with dusty mouthfeel. This is merry-go-round of red grapes—43% zinfandel, 22% syrah, 13% carignane, 9% merlot, 8% cabernet sauvignon, 5% petite sirah. Like many such “everything in vineyard” blends, this is riot of red flavors with none dominating; dry, sturdy, improves with air. The character is in the florid mix, and 2013 was good year for red grapes in the North Coast: hot days, cold nights, smaller-than-average berry size producing concentrated flavors; there are so many flavors here you’ve got to like at least one of them. The Steelhead name reflects the winery’s commitment, in partnership with Trout Unlimited, to the restoration of California’s Wine Creek (a tributary of Dry Creek), northwest of Healdsburg (Sonoma). A percentage of sales go to preserve habitat for steelhead trout. Steelhead trout and rainbow trout are the same species, but steelheads spend most of their lives in the ocean, returning to freshwater only to spawn; rainbow are freshwater only. Unlike most salmon, steelhead can survive spawning and can spawn in multiple years. The wine named after them is solid red for the price. $15
Second photo: Steelhead trout 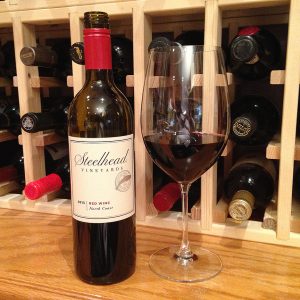 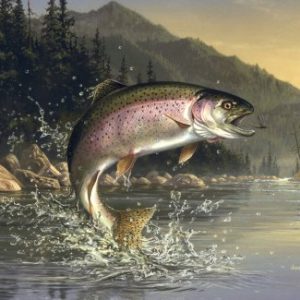