Sometimes called “baby Amarones,” ripasso is made in the Valpolicella zone north of Verona in the Veneto region of Italy. Ripasso is not as well known as Valpolicella and Amarone made from the same area, but it shares many of the same characteristics and is made from same grapes. “Ripasso” is Italian for “repassed,” a reference to a production process whereby regular, fermented Valpolicella  (which is a blend of three regional native red grape varieties—Corvina, Rondinella, and Molinara) is added to a cask containing skins and lees left from the fermenting of Amarone wines. The “repassing” of lighter Valpolicella wine over the remains of bigger Amarone wine adds color, texture and flavor and starts a second fermentation that increases the wine’s alcoholic content. Amarone is made from raisined grapes and is significantly labor intensive, leading to prices of $50 and well above. Ripasso may not soar to the fruity heights Amarone achieves, but it gets close and usually at less than half the price. There also is a story to how the wine got to the US. Vias Imports (founded in 1983) is the leading importer of Italian wine into the U.S. market. Acinum is their first-ever proprietary wine, imported in 2015. It was created by Vias chairman Fabrizio Pedrolli in collaboration with oenologist Enrico Paternoster. Produced in the Veneto region of Italy, Acinum (the name means “grape” in Latin) offers quality bottlings from a region famous for wine excellence at reasonable prices. Vias also has a Prosecco, a Soave Classico, a Valpolicella, and an Amarone in its US portfolio. Enjoy Acinum Valpolicella Ripasso whenever you want an elegantly delicious, serious wine for a nice price. $23
Importer’s website
Second photo: Valpolicella vineyard 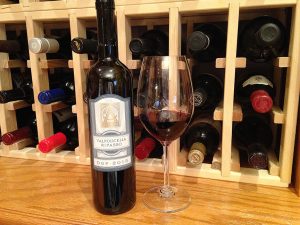 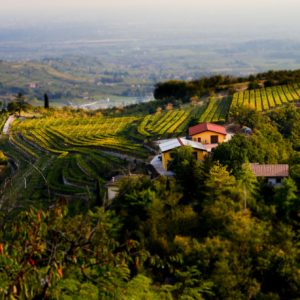