restrained tannin and acidity, medium-thin body; entry-level Bordeaux significantly exceeds expectations; 67% merlot, 26% cabernet sauvignon, 7% cabernet franc. Gisele and Daniel Vidal own the winery, now assisted by their son, Florian. The vineyard in the Entre-deux-Mers (“between two tides”) region takes its name from an ancient quarry alongside the property, near the River Segur. There is no grand château, but stone extracted here was used to build the buildings and monuments in Bordeaux and the vineyard’s cellars are dug deep into the rock, taking advantage of the old quarry’s features. The name Segur comes from Old French meaning ‘well-defended’ or ‘safe-secure.’ France and England fought over this territory in the Middle Ages. Later, Napoleon’s armies tramped through here on their way to Spain. Thus the extensive use of stone in fortifications throughout the area. Entre-deux-Mers is located between the Garonne and Dordogne rivers in southern part of Bordeaux (thus the between two tides name) and is the largest sub-region in Bordeaux. The Dordogne and Garonne meet in the Gironde Estuary, the defining feature of Bordeaux. Entre-deux-Mers is converting to a predominantly red wine region, but previously it was better known for whites and only whites from here can use the AOC (appellation d’origine contrôlée) Entre-deux-Mers name; reds are “Bordeaux.” This is tasty value at superb price. $9-12
Château Roc de Ségur website (requires translation)
Second photo: Gisele and Daniel Vidal 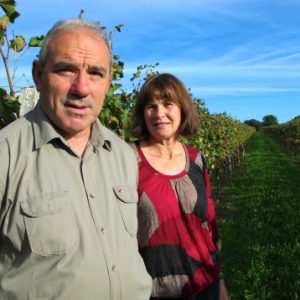