Columbia Winery Columbia Valley Cabernet Sauvignon 2013: Almost black color; neutral nose; blackberry, cherry, blackcurrant tang, black olive on the palate; mild tannin and acidity, smooth, easy drinker. Cabernet sauvignon 81%, syrah 13%, malbec 3%, other red grapes 3%. The Columbia Valley is The State of Washington’s largest appellation with more than 60% of the wine grape planting (17,000 acres); it even includes part of Oregon. You generally think of the northwest as a temperate rain forest, but wine is done in the shrub steppe lands on the eastern side of the Cascade Mountains; vineyards get about eight inches of rain annually and 16 hours of sunlight daily (Oregon’s vineyards are similar). The Columbia Valley does have the mighty Columbia River—largest river in the Pacific Northwest, 1,243 miles long, flowing through a Canadian province and seven states, draining an area the size of France. So there is water to be had, and Washington vintners use their terroir and their water rights to make excellent wine; Washington and New York tie for second in U.S. grape production (each with 3.5% of U.S. total), but Washington has more wineries and usually produces slightly more wine. Texas ranks around fifth-to-seventh, depending on who is counting and how they count. California dominates, by the way, with almost 89% of U.S. wine and grape production. $16 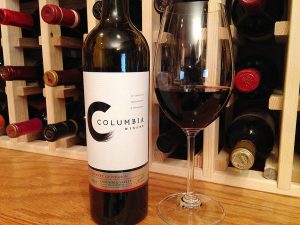