Columbia Winery Composition Red Blend NV: Unlike earlier versions of Composition, where cab led, in this effort syrah dominates (70%), followed by malbec (13%), petit verdot (5%), merlot (3%), mourvedre (3%), and other red varieties (6%). Deep red color; reluctant nose; raspberry, plum, plenty of oak and sweet fruitiness on the palate with some redcurrant tang on the finish; soft tannin and medium acidity, medium-heavy mouth, smooth. Columbia Winery—like Composition Red Blend—has been searching to find itself this century. Founded in 1962 by University of Washington professors, it was the first Washington winery to focus on European wine grapes and first to introduce syrah to the state, so this effort reflects that heritage. The 21st century has not been kind to Columbia, with the winery changing ownership three times since 2001. Now it is a Gallo brand, which should bring stability. Production has been sharply reduced, which should augur for finer efforts. Composition seems aimed at the Apothic/Menage à Trois market, but with less flamboyant fruitiness and oak. A competent effort, as you expect from Gallo. $14 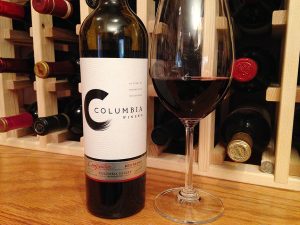