Decanting wine is a strategy you often find recommended. Here are some of the whys and whens.

The main reason to decant wine is to expose the wine to oxygen. You also can decant wine if you want to avoid sediment in the bottle or to make a better presentation of the wine on your table, but exposure to oxygen is the principle reason for the effort.

Oxygen exposure boosts wine’s aromatics. That is vital because smell is the major force behind your experience of wine. Oxygen exposure also affects wine texture, making it smoother and rounder in your mouth and reduces tannic bitterness, the other main elements of your wine experience. So decanting improves wine in the most important factors of your wine enjoyment. 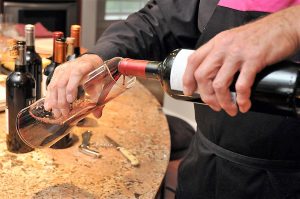 Young red wines are always candidates for decanting, but decanting can enhance white wines, rosé wines, and even sparkling wines. And decanting does not kill the bubbles in sparkling, BTW.

In general, white, rosé, and sparkling wines should be decanted for around 15-20 minutes. You are looking for freshness in such wines and tannins are unlikely. You also decant for a shorter period than red wines because you do not want those wines, especially sparkling, to warm past their ideal drinking temperature.

Red wines, particularly young and tannic reds, benefit from longer decanting. An hour or more is not uncommon, but you also can use decanting systems that include aeration elements to speed up the process. The point is to expose the wine to as much air as possible. Rule of thumb: the more tannic the wine, the longer the decanting time.

Tannat, barolo, and Bordeaux and Napa-Sonoma blends—which can be the most tannic wines you can find when young—are prime candidates for longer decanting. Experiment. Decanting also helps blow away off-putting odors found in wines—barnyard in some Burgundies, for instance. Typically those odors are not flaws because the wine becomes lovely after exposure to air.

Be careful when decanting older wines. When the bottle is 10 years old or older, extended decanting time can rob the older wine of its liveliness and complexity. The patience you exhibited by resisting opening it accomplished much of what decanting does for a younger wine. You usually decant older wines in order to eliminate the sediment that is much more likely to be found in older bottles.

Last round: If you are attacked by a mob of clowns, go for the juggler. Wine time.