Pale pink color; citrus, jasmine on the nose; rich in the mouth with nectarine and yeasty dough on the palate.

The wine brings together two fascinating stories. First, it is made with chenanson grapes, a red grape exclusive to France. Chenanson is an offspring of grenache and jurançon noir (a grape mostly limited to southwestern France) created in 1958 by Paul Truel of Montpellier’s Institut National de la Recherche Agronomique. Chenanson vines are distinguished early in the growing season when their shoots are covered with a white, cotton-like down. Chenanson wines bear a marked similarity to those made from its parent variety, grenache, being vibrantly colored and with gentle sweet-spice aromas.

The second story is the Languedoc town of Carcassonne (halfway between Toulouse and the Mediterranean Sea) where the Domaine Sarrail vineyards and winery are located. Situated between the Pyrenees to the South and the Black Mountains to the North, Carcassonne is best known for its fabulous medieval city, surrounded by massive battlements. Carcassonne is a UNESCO World Heritage site.

The vineyards were founded in 1292, but had fallen into neglect. In 1980, Henri Sarrail decided to bring them back to life, and so he has. Son Jean-Luc has run the operation since 2000, but Henri remains in the picture to “create wines of passion and exception.” The winery is part of the Cite de Carcassonne IGP established in 1981. The cooperative includes 25 producers; Domaine Sarrail is the largest with 250 acres and one of the few selling their wine as a Domaine. Sarrail employs a state of the art press which uses nitrogen instead of oxygen to preserve freshness. The press operates at an extremely slow rate to make this rosé, preserving freshness and purity. The winery may be cutting-edge, but it is located in the original 1292 building. 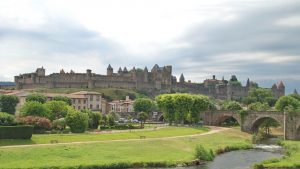 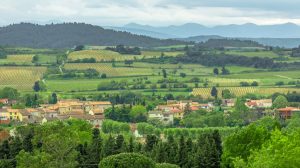