Dark purple color; clean, restrained nose of black, red fruits; cavalcade of black and red fruits, Italian and French grapes on the palate—blend includes cabernet sauvignon, merlot, syrah, barbera, and sangiovese, all from Washington State. Cab gives backbone and structure, merlot adds chocolate and smoothness, syrah blackberry and plums, barbera spice, sangiovese red fruits and anise/licorice notes. Quite a lot going on, and the wine benefits from some air to come together.

Eye of the Needle is a negotiant operation grabbing excess wine in Washington’s Columbia Valley. That means they get a discounted price on juice a winery sells under its own label for $30-plus a bottle, often blend it with other similar juice, and produce a fantastically well priced wine. Thus the melange of grapes in The Eye.

Bob and Lauren Bullock own the operation; Bob was a wine seller, took early retirement after suffering a stroke, then (according to their website), went “back into the wine industry, but I’m going to do it the way I want to do it.” One of his observations: “it didn’t matter how wonderful the wine was or how high its score, people would not buy it if they could not afford the price.” Eye of the Needle makes good, affordable wine.

The Bullocks make some wine from their own grapes now, but the core of their operation remains buying other excess press from other wineries. Which inspires their winery name—“We scour the Washington wine scene looking for that right wine that meets our standards (must taste delicious). We are very picky. It’s like looking for a needle in a haystack (are you getting it now?).”

The Bullocks are big Seattle Seahawks fans and one of their wine lines is, thus, named 12th Blend (after the Seahawks’ 12th Man—a “stolen” designation which infuriates Texas A&M fans who created the concept early in the last century). Their “Bottles for Bread” campaign donates two meals to Northwest Harvest for every bottle sold; Northwest Harvest serves 350 food banks in Washington State. “Our vision is ample nutritious food is available to everyone in Washington State,” according the the winery’s website. “The minute people hear that we donate two meals for every bottle we sell, they say wow, I’ll take a case.” In the first 18 months of the promotion, Eye of the Needle donated more than 150,000 meals.

The Eye has a bit of rusticity and some disjointedness on the finish, but is outstanding value. $14 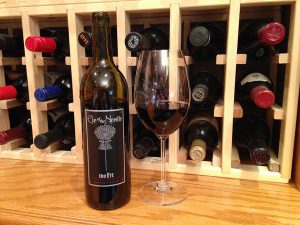 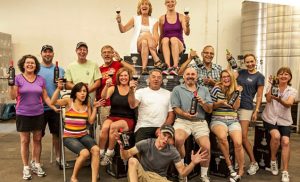