Significant tannin in this 73% cabernet sauvignon, 24% merlot, 2% malbec, 1% cabernet franc blend; benefits from decanting or air time in large glass. Plenty of oak from 20 months in barrel. Rich, complex, full in the mouth, black olive, tobacco, chocolate emerge in mid-palate and beyond. Drinks much more like an Old World Bordeaux blend (which it is) than a typical Napa Bordeaux blend (which often is more jammy).

Franciscan is a pioneer in meritage wines (quality blends that are less than 75% of one variety of grape); their five-grape Magnificat in 1985 was a trailblazer (this effort is four grapes; the wine originally was named for J.S. Bach’s masterpiece for five voices singing a celebration of the Virgin Mary in Luke’s gospel; the words likely are the earliest Marianist hymn in Christianity: “My soul doth magnify the Lord : and my spirit hath rejoiced in God my Saviour. For he hath regarded : the lowliness of his handmaiden…).

Meritage is the American name for red blends. The Meritage name is a portmanteau of “merit” and “heritage.” It is not French and is not pronounced “meritaghe,” but “merit” “tage”.

Franciscan is part of the Constellation Brands mega wine company. The wine is made in the Oakville winery located in Franciscan’s Oakville Estate. The winery and vineyards are in the heart of Napa—across the road from Opus One, adjacent to Silver Oak, just west of Screaming Eagle, across Hwy 29 from Robert Mondavi and Far Niente. The winery earned Napa Green Certification in 2009; the focus remains honoring the land. Original owner Agustin Huneeus Sr. famously said: “you don’t have brands in our business, you have properties.” Franciscan is about as old family as you can get in Napa.

Janet Myers is the director of winemaking after following a non-traditional path. She gave up her pursuit of a doctorate in biological anthropology to move to London to work in the restaurant industry, where she lived above a wine shop and reveled in sampling the wares. “When I realized that this was an industry that combined science and agriculture—which is my family’s background—I enrolled at UC Davis and haven’t looked back,” Myers says. She earned a masters degree in enology and began a career at Robert Mondavi, followed by Santa Cristina Estate in Chianti, work in Australia, Beaulieu Vineyards, Stag’s Leap Wine Cellars, and Louis Martini. She came to Franciscan in 2003 and became director in 2005. By Meritage Association rules, Magnificat is the premier red blend produced by her operation. $51 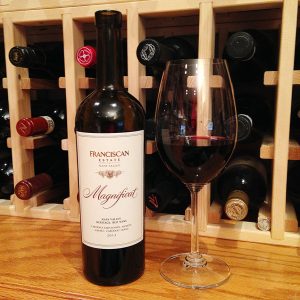 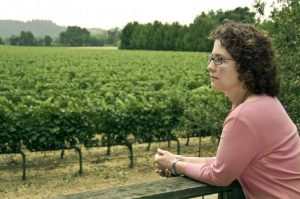