Kim Crawford Unoaked Chardonnay 2014: Light straw color, lilt of grapefruit on the nose; peach, lemon meringue, tropic fruit, pinch of pineapple on the palate; crisp, light and creamy, medium texture, nice acidity, some complexity from five months of aging on the lees, but a simple, straightforward chard at its core. With no oak, you get a pure east coast of New Zealand (Marlborough and Hawke’s Bay fruit) chard with this pour. Kim Crawford is one of the NZ standard bearers in world-wide wine; it started making wine in 1996, and unoaked chardonnay was the first bottling. The chardonnay grape is extremely versatile and can be made in let-the-fruit-speak-for-itself style such as this, or as tricked-up oak-and-butter monsters that soared in popularity in the1980s. Chardonnay is the world’s second-most planted white wine grape, behind only Spain’s airén—and that only if you measure by acreage (airén vines are much more widely spaced). Oak can be used like pancake makeup to trowel over flaws; unoaked gives you chard pure and simple. This is clean, fresh, charmingly guileless. $16 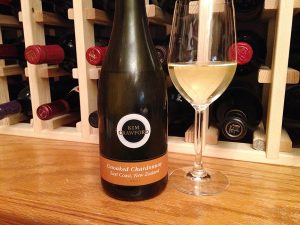