Deep ruby color with some translucence; black cherry, raspberry, whiff of oak and violets on the nose; cherry, plum, raspberry, redcurrant tang on the palate.

Fairly restrained California-style pinot. Medium body, round tannins, balancing acidity, smooth midpalate that evolves into spice, cinnamon, redcurrant, dollop of chocolate on the fairly long finish. A blend from five different Sonoma Coast vineyards (all within 10 miles of cooling waters of the Pacific Ocean), this is tasty with moderate complexity that emerges on the finish. A value leader from longtime pinot queen Merry Edwards; her designated block efforts deliver more complexity at higher prices. While this has aging potential, the Sonoma Coast bottling traditionally has been the first release and most approachable Merry Edwards pour when young.

Meredith “Merry” Edwards is Russian River Valley/Sonoma superstar. A Cal-Berkley grad, Merry first studied for her master’s in nutrition, then fell in love with wine, then earned her master’s in food science with an emphasis in enology (science of viniculture) from Cal-Davis in 1973. She worked her way up the winemaking career ladder, deftly overcoming misogynist obstacles, helping develop wineries, building a consulting career based on her obvious talent.

Merry and her husband, Ken Coopersmith, purchased their first vineyard—Meredith Estate—in 1996, followed by Coopersmith Vineyard in 2001. Now in her fifth decade of winemaking, Merry is celebrated as a pinot noir superstar, inducted in 2013 into the Culinary Institute of America’s Vintners Hall of Fame and winner of a James Beard Award for best wine, beer, or spirits professional. Today, female winemakers are in high demand and wildly successful. Merry Edwards blazed the trail.

Merry Edwards Sonoma Coast Pinot Noir 2012 is excellent value—when it comes to true pinot noir quality, you are unlikely to get it for much under $30. You can find some nice tasting wine that claims to be pinot noir but it typically does not hit the high notes diva pinots regularly achieve. This wine is a diva understudy who performs very well in the matinees. $38-48 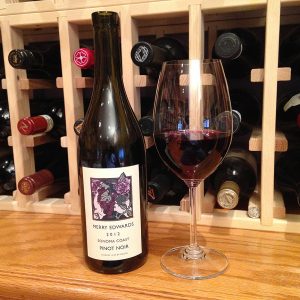 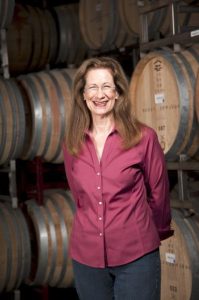