tangerine, green apple, nectarine, stone fruit on the palate; nice, crisp acidity, juicy, vivid fruit, restrained oak, medium body; somewhat one-dimensional, but clearly an easy drinking, go-to chard that plays in the middle between oak-butter bomb and flinty-austere efforts. You expect no less from Michael David who consistently produce high quality, large production, reasonably priced wines in Lodi, a noteworthy achievement year after year. Chardonnay is a green-skinned grape used to make white wine and Champagne/sparkling wines. It is the world’s second-most grown white wine grape, behind Airén, the staple of Spanish wine making (although that lead is declining as Spanish vineyards change direction), but chardonnay is grown in more places than any other wine grape. It essentially is neutral in taste, so flavor comes from terroir (environment where grape grows), fermentation method, and use of oak—chard is tightly bound to what the winemaker wants to accomplish. Michael David grapes come from Lodi, a region in San Joaquin County in the northern part of California’s Central Valley. MD gathers grapes throughout the region, produces three distinct chards, then blends them to make this effort. Fermentation occurs in stainless steel to bring forth the fruit in some, others ferment in French oak for roundness, half of the wine goes through malolactic fermentation (MLF) to add butter and smoothness—thus attaining the middle ground and capturing the best of both chardonnay worlds. This typical skillful MD effort should charm chard lovers, even get a nod from ABC stalwarts (ABC is the Anything But Chardonnay movement largely engendered by wildly over-oaked, excessive MLF/butter efforts last century). $16 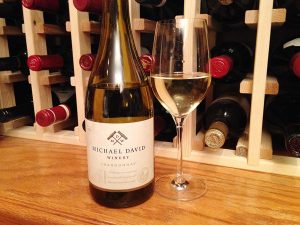