light body, restrained acidity; avoids oaky butter bomb with only 30% aged in oak, 70% in stainless—a major trend in California chards in response to the ABC backlash (ABC is the Anything But Chardonnay movement largely provoked by wildly over-oaked, excessive MLF/butter efforts last century). This is good value-for-price play, which was the Mondavi intention when it introduced Private Selection in the mid-1990s. Simple wine, made in mainline style, tasty-but-restrained fruit; you get the green apple and squirt of citrus expected from most chards, you do not get palate-pummeling oak, Paula Dean butter bombing, tongue-slicing acidity, flinty austerity. A chard for folks that want a simple, no-offense chard to complement a laid-back party or meal. Robert Mondavi (1913-2008) was a giant in wine, not just in California and U.S., but worldwide, particularly with his insight into labeling with grape variety names instead of the baffling Old World system of labeling by location. He produced premium wines, then moved into everyday wines under Private Selection label, then into inexpensive wines with Woodbridge label, a move he later regretted and criticized his sons for doing. A short time later, Constellation Brands, the New York Finger Lakes corporation rising to become the largest wine company in the world, acquired Mondavi in a controversial takeover for $1.36 billion in cash and debt assumption. Constellation has record of taking over iconic brands—Kim Crawford in New Zealand, Ruffino in Italy, Clos du Bois, Franciscan, Simi, Ravenswood in California, Corona in beer, Svedka in vodka. Constellation also has record of allowing brands they acquire to remain true to reason they were worth acquiring, a laudatory and sometimes rare trait in mega-corps. This is simple chard; excellent value-for-price. $9-11 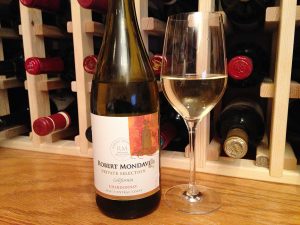