supple with sticky tannin, modest intensity, creamy mouth means it slides down easy, moderately long finish with lingering tannin and echo of oak. Easy drinker, as befits a grenache, with some Aussie swagger at 15% alcohol. Turkey Flat holds an important place in Australian wine/grape history. In 1847, Prussian-Silesian settler Johann Friedrick August Fielder planted the first shiraz vines near Tanunda Creek where turkeys once flourished; the vines flourished, too, initiating a signature grape in Australia. He also planted grenache as part of his Rhône variety grape strategy; some of the grapes in this effort come from vines nearly a century old, children of Fielder’s trailblazing efforts. In 1865, Gottlieb Ernst Schulz purchased the land and added a butcher business, which grew into a dairy, but the vineyards were kept until the current generation transformed the historic bluestone butcher shop into the entry to the wine cellar and the heart of the Turkey Flat wine business. Now gnarled and twisted, the vines Fielder planted long ago still produce grapes and help define the intense, concentrated signature of Turkey Flat pours. The Barossa Valley is northeast of Adelaide in South Australia; it is major Aussie wine region and winemaking dominates the Barossa economy. Barossa got its name from Col. William Light in 1837; Light named it for a British victory over the French in the Battle of Barrosa in 1811; the clerks registering the name, however, used one “r” instead of two and “s” twice instead of once; it is surprising how many place names get screwed up by squinty-eyed clerks in green eyeshades. Some of the oldest shiraz/syrah vines in the world grow in the Barossa Valley, starting with Fielding and his plantings at what is now Turkey Flat Vineyards. Grenache/garnacha traces origins to Spain, so look to Spain and southern France for food pairing with this wine: tapas, lamb, tomato-rich dishes, pork, lighter red meats, salmon, turkey—making it a versatile Thanksgiving/Christmas pour. When you sip Turkey Trot grenache or syrah, you taste Australian history. $37 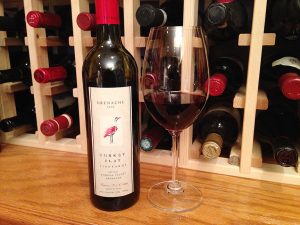