Rich, toasty style with some licorice, tar, and cocoa notes; medium body; significant tannin; very nice fruit adds background fruity sweetness that is balanced by good acidity. Time spent in oak barrels of various ages add attractive oak in the background and a supple, velvety texture. From start to finish, there are no hard edges. Blend of 80% syrah and 20% grenache; made in Ventoux region of the Provence region of southern France.

Odette and René Bastide bought Château Pesquié (Fishpond) in the early 1970s and began to restructure and restore the vineyards. The Côtes du Ventoux AOC was created in 1973, and the family became pioneers of the new AOC (Appellation d’Origine Contrôlée—similar to a DOC in Italy). The AOC gets its name from the Mont Ventoux, the prominent mountain (covered with snow three–to–four months out of the year) that overlooks the vineyards. The soil is notable for its rocky limestone and clay composition.

In the mid-1980s, the couple’s daughter and son-in-law, Edith and Paul Chaudière left their medical careers to help run the family estate. Paul’s father, Charles Chaudière, was an oenology professor, and Paul and Edith plunged themselves into wine education. They took the domaine out of the regional cooperative and set up the independent Château Pesquié cellars in 1989. In 2003, Paul and Edith’s two sons, Alexandre and Frédéric, took over operations with a continuing emphasis on quality wine production.

Other photos: Vineyards and Mont Ventoux; the limestone and clay soils of Château Pesquié Ventoux vineyard 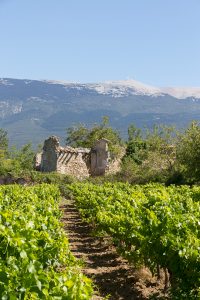