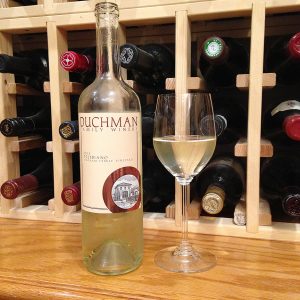 Very light and refreshing; no oak, dry, nice acidity; super summer pour; serve very cold. Made with 100 percent Texas grapes grown on the Bingham family vineyard on the Texas High Plains; the vineyards are in Terry County near Meadow—between Lubbock and Brownfield.

Trebbiano is the most planted white grape in Italy and France (where it is known as Ugni Blanc). It is vigorous, high-yielding, disease resistant, and not well known. Part of the reason for its anonymity is its basically neutral flavor. It shines as a refreshing, bright beverage—certainly this Duchman effort accomplishes that—but does not have wow factors found in chardonnay, sauvignon blanc, riesling, and other competitors for wine drinkers palates and purchasing power.

Trebbiano works well as a blender grape, but its true métier is as the base grape for cognac, armagnac, and brandy. It also is used to make balsamic vinegar. Trebbiano’s best-known varietal appearance is Italian Trebbiano d’Abruzzo, the white wine counterpart to Montepulciano d’Abruzzo. In Umbria, it is known as Procanico and is found in the wines of Orvieto, the great white wine region of central Italy. It commonly is blended with Malvasia Bianca. In Tuscany, up to 10 percent of the grape can be added to the region’s famous red wines, typically to increase production since it adds volume and acidity without affecting taste.

All of which makes the Duchman foray into a 100% trebbiano offering both interesting and courageous. This effort is exceptionally clean and refreshing, which is the play for trebbiano since it does not score on distinctiveness or deliciousness—which is not to say it tastes bad, it just tastes plain. That can be a good thing on a hot day when you want something simple, refreshing, cold. Pair with fish, chicken, or pork; with pasta and antipasta; very useful in making fine sauces, too.

Duchman Family Winery is the dream of Drs. Stan and Lisa Duchman, who set forth to make world class varietal wines in Texas based on Old World grapes. Stan is an interventional cardiologist, Lisa a doctor of optometry. Dave Reilly is the winemaker. According to the winery website, Reilly strives “to make wines that are true to their varietal character using the highest quality grapes grown in Texas.”

As do many Texas wineries, Duchman makes money off both its wines and its winery as a venue and tourist attraction. Duchman is one of the top wine destinations in the state. HGTV ranked Duchman as one of the 20 most picturesque wineries in the country—country, not just Texas. As amazing as it may seem to some, the Texas Hill Country AVA is the second-most visited wine region in the nation, trailing only Napa. Duchman is located near Driftwood, Texas (southwest of Austin, north of San Marcos, northeast of San Antonio). Driftwood has a post office, a Baptist church, and a wedding venue and party place (Stonehouse Villa), so if you blink while driving through, you likely will miss it.

Duchman Family Winery Trebbiano Bingham Family Vineyard 2015 excels as a refreshing summer sipper and also can be used in fine cooking without asserting a strong personality. $12-18