Martini & Rossi began in 1863 as a vermouth maker; primary leadership included businessman Alessandro Martini and winemaker Luigi Rossi. The company evolved over the next 150 years, led primarily by the Rossi family, expanding its brands in the late 20th century to include Bacardi rum, Dewar’s Blended Scotch Whisky, William Lawson’s Blended Scotch Whisky, Bombay Sapphire Gin, Grey Goose Vodka, Eristoff Vodka, Cazadores Tequila, in addition to their core products—various Martini vermouths, Martini Prosecco (from Veneto region) and Asti (from Piedmont region), and Noilly Prat French vermouth. Martini’s biggest marketing effort has been automobile and speedboat racing since 1968. Vermouth is a special wine, and thus the Martini niche. It is an aromatized wine—a type of fortified wine flavored with various botanicals (barks, flowers, roots, seeds, herbs, spices). Rossi was the expert on the secret ingredients, which remain the same today for their core product, Rosso. In the beginning, vermouth principally was an aperitif, but in the late 1800s bartenders began incorporating it into cocktails—the Martini and the Manhattan are signal examples, the first taking its name from Martini Rosso. There are two types of vermouth, sweet and dry, although French maker Noilly Prat (now owned by Martini) pioneered use of oak casks where wine made from white grapes receives doses of some 20 herbs and spices every day over a three week period to distinguish itself from the Italian efforts. Today, there are a dizzying variety of vermouths, each with their own “secret formula” and techniques. Returning to sparkling wine—Martini Prosecco is a value play, not a substitute for Champagne or cava or better sparklings, but it is ideal for Bellini cocktail (one part Prosecco and two parts peach purée). $10-15
Louis Martini website 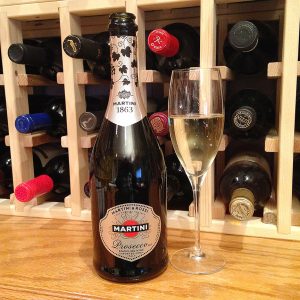