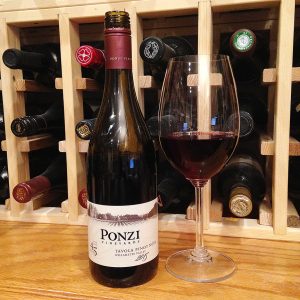 Bright fruit in fruit-forward style; soft tannins with balancing acidity. Fermenting in French oak for 11 months, 20% new, gives it chocolate and caramel notes blessedly without engendering an oak monster. Fruity sweetness develops with air exposure and asserts on the nicely long finish. Benefits from decanting to smooth out the initial attack on pop-and-pour; decanting also brings out subtler aspects of the wine and leads to smoother, richer mouthfeel.

The fruit for this effort comes from Ponzi’s LIVE certified sustainable Avellana Vineyard as well as from other sustainably-grown vineyards in the Chehalem Mountains, Yamhill-Carlton, and Ela-Amity Hills AVAs. This is the entry-level pour from Ponzi, one of the stars of Willamette Valley/Oregon wineries. If you enjoy this, and there is much to enjoy, next time move up in the Ponzi scheme of wines to experience even more etherial delights.

Winemaker Luisa Ponzi consistently delivers quality and is second generation of reasons the Willamette Valley is in the conversation as one of the world’s great pinot noir producing regions, something unheard of just a few decades ago when there was Burgundy and then nothing else.

The Willamette Valley (south of Portland) is notable for the strictest label laws in the U.S. and has a deeply serious commitment to environment and worker-friendly agriculture. Ponzi has been a leader in that effort since Dick and Nancy Ponzi became pioneering winemakers in the Willamette Valley in 1970. By 1989, Robert Parker noted: “Ponzi continues to make Oregon’s most complex Pinot Noir” and likened the wines to the great wines of Burgundy. In 1993, daughter Louisa Ponzi returned from post-graduate enological studies in Beaune, France, after receiving the certificate Brevet Professionnel D’Oenologie et Viticulture, the first American woman to earn the prestigious distinction. She became the winery’s lead winemaker the same year. Mom and dad must have been proud while pinot lovers are deeply grateful.

Luisa Ponzi is an example of how women are now some of the premier winemakers in the world. In part, it is biology—statistically women are more likely to have superior noses to men and more taste receptors than men, plus they can multitask more effectively than men. Freed from gender discrimination, women winemakers rise to the top of the profession and produce sophisticated delights such as this pinot noir. Luisa is more than a giant in Oregon winemaking, she is force in the entire wine world. She and her sister, Maria (director of sales and marketing) became the owners and operators of Ponzi in 2012, making Ponzi one of America’s few sister-run wineries. May the sisterhood of wine increase.

Ponzi Vineyards Tavola Pinot Noir Willamette Valley 2015 is good start point for the enjoyment of Ponzi pinot, now recognized as a world-class player in pinot production. You get a generous taste of the major producing areas of Willamette Valley at a reasonable price. My money says you will come back for more and move up on the Ponzi pinot pyramid. $23-27