Simi is Sonoma County history. Giuseppe and Pietro Simi made their first wines in 1876, and their winery has been making wine continuously in their stone cellar in Healdsburg since 1890. In 1904, both brothers died suddenly, and Guiseppe’s daughter Isabelle took over at age 18. Didn’t matter, she soldiered on. Sixteen years later, prohibition shut her down as a winemaker, but she held on to the cellar and the wine stored within. In 1933, when the nation finally came to its senses and repealed the lunacy of Prohibition, Isabelle had 500,000 cases of well-cellared wine to sell. Isabelle ran the operation until 1970—64 impressive “you’ve come a long way baby” years.

Russell Green then purchased the winery; he also continued to rely on women winemakers, including Zelma Long, one of the giants in California winemaker regardless of gender (and Isabelle also continued to contribute). Green sold to Moët-Hennessy in 1981, and Long eventually became president and CEO of Moët-Hennessy. Simi acquired the Landslide Vineyard in 1984. Constellation Brands, world’s largest wine company—a title they enjoy because they do wine right—purchased Simi in 1999.

Simi has made wine, often excellent wine, for almost 150 years. For more than a century they were trailblazers in female-directed wine operations. Continues today: Susan Lueker is director of winemaking, Lisa Evich is the winemaker. Simi became green certified in 2008. This is exemplar of Russian River-style chardonnay. Enjoy with some reverence. $26-30 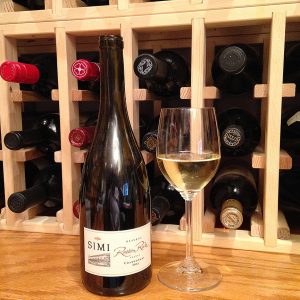