New Zealand is making a case for the most consistently good, best priced, good wine in the world. Sure, the wine’s big dogs in the Old World and the U.S. West Coast make outstanding wines, maybe superior to New Zealand, but New Zealanders have hit the middle-tier sweet spot where they consistently deliver outstanding value-for-price pours. Nowhere more often than their sauv blancs, but they score with pinot noir and others, too.

Trinity Hill began in 1987 in the London’s famed Bleeding Heart restaurant owned by Robert and Robyn Wilson. Kiwi wine legend John Hancock offered the couple (Kiwis who made it big in England) a bottle of his award-winning chardonnay, then convinced them they should join him to produce world-class wines in the Hawkes Bay region of New Zealand, specifically in the Gimblett Gravels district. The winery opened in 1993 as a pioneer in the region.

Charles Banks is another part of the Trinity Hill story. Banks bought Screaming Eagle, the California cult cabernet, in 2006 and also owns Jonata, a central California winery. In 2010, Banks left his position at managing partner at Screaming Eagle and Jonata to focus on Terroir Selections, a corporate entity that allowed him to be involved in wine worldwide. In 2014, Banks became a co-owner of Trinity Hill. Banks also is senior editor of Fine Wine Magazine with a global readership of more than two million.

So, Trinity Hill marries world-famous restaurateurs in England, an iconic winemaker in New Zealand, and world-wide wine power from California. They deliver with this sauv blanc effort, and smart money says they will continue to do so. Trinity Hill Hawkes Bay Sauvignon Blanc is textbook New Zealand sauv blanc, which means it is great wine and great value. Enjoy with almost any food. $16-17 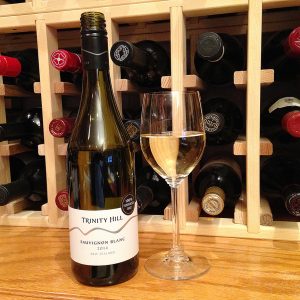